I am an inversion addict! I admit it. I understand and am committed to living in the awareness that yoga is more than a physical practice. For the most part, I endeavour to find balance between yang and yin in my practice and life, but some days life just happens, and I skip parts of my practice. However, it is rare for me to skip going upside down at least once during the day.

Why? What are the benefits? I could give you the generic list that can be easily found through Google. Instead, I’ll tell you my inversion journey and story. So, . . . . . here it is!

It was many years after I started yoga that I began to play with “advanced” inversions. This was mainly due to circumstance as when I started in 2004, yoga was not a major thing here. There may have only been one studio in town (that I didn’t know about), I was practicing in a class at a gym where we didn’t do too many inversions and Facebook and Instagram weren’t going full force shoulding me into poses that could have either been inspiring, intimidating or downright dangerous based on my skill level at that particular point in time. I am immensely grateful that I had this time to build my foundation and develop the sense of how to really listen to my body and its limits. I didn’t attempt a headstand until 2009, felt a major accomplishment when I did it away from the wall at my first teacher training in 2010 but never felt completely comfortable and confident in it until 2013 when my teacher and classmates helped me refine it at my second training. From there I merely dabbled in inversions and arm balances mainly in classes when teachers would introduce them and have us experiment.

On Jan 15, 2016 I was convinced (roped into?) doing a 100X100 challenge. Three of us committed to doing 100 handstands for 100 days. Crazy? YES! Difficult? YES!!! Worth it? DEFINITELY!!!! In the beginning I couldn’t imagine finishing the challenge, but now almost two years after it ended, there are very few days that I don’t do a handstand and incorporate that work into my personal practice.

Yoga has taught me many things about myself and life, and my handstand practice highlighted these lessons even more. There are many benefits to including inversions consistently in an asana practice, but I’ll merely share a few that have benefitted me specifically:
Inversions are an amazing part of a yoga practice, but are only a part of a whole system. Without the breath, being present, mindfulness, self-awareness, etc. inversions are simply gymnastics. Gymnastics is a wonderful sport, but if your intention is to practice yoga remember to connect to and honour all of the parts!

Interested in bringing inversions into your current practice? If you are unsure of how to get started, how to build a foundation or you just want some tips and pointers, join Salli and I for our upcoming inversion workshop this Saturday. Feel free to contact either of us for more information or details. 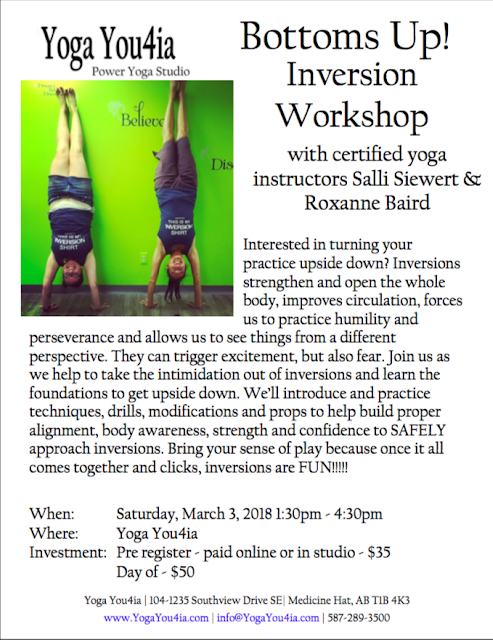