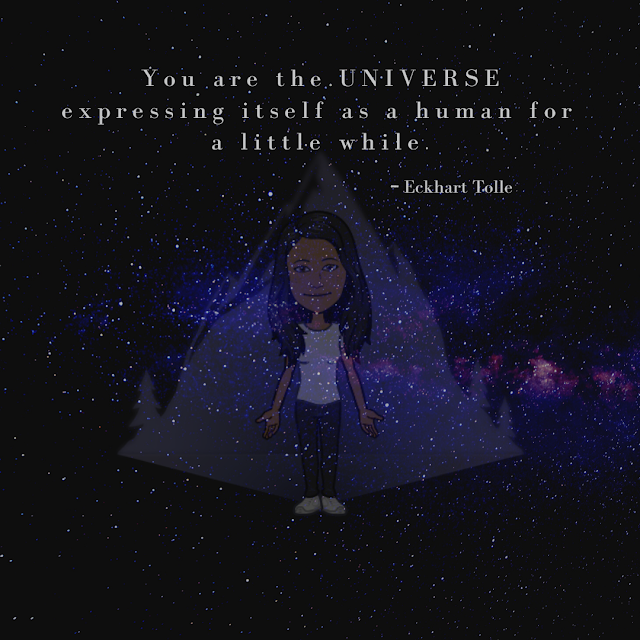 
You are the universe and the universe is in you! Remember way back in Sutra 1.3 where we learned that at our core we are divine and we are light? Today's sutra is one that reinforces this concept. The sutra before this (sutra 1.23) stated that another way to reach the goal of yoga (samadhi) is to surrender to something more than ourselves. This sutra is working to explain exactly what that "more than us" is.

Sutra 1.24 basically defines Ishvara (or more specifically what it is not). First, it is difficult to put into words. It can be associated with the divine, universal intelligence, god, allah, yahweh, light and basically is the idea of something that has a greater knowledge of the universal workings and patterns of the world we live in. Ishvara is NOT affected by misery, or ignorance. It is untouched by having to take action and being driven by "rewards" that come about from action. It is not affected by desire or having to make impressions. It's beyond desire, actions or deep-rooted beliefs. Ishvara is pure goodness that isn't tainted by the impressions of the outside world. It could be considered a model for us to strive for, but it's more than that because it isn't outside of us, it resides within us. Ultimately, Ishvara is us!

I think this quote from Osho sums up the basic idea of this sutra best when he says "You can become a god right now because you are already that – just the thing has to be realized. You are already the case. It is not that you have to grow into a god. Really, you have to realize that you are already that." Now, I know attaching words to this energy that is more than you can be tricky. The word god can be triggering while the word universe can trigger a negative reaction too depending on your background. Whatever you choose to identify it as, I want you to spend this week reflecting on your belief on what it is that is more than you. Do you believe in that? What do you call it? What is your relationship to it? What role does it play in your life? Can you recognize it within yourself?

Now, you may be asking . . . what does this have to do with yoga (which is supposed to be a practice that isn't based on religion)? First, this idea doesn't have to be a a religious concept. Also, remember that in the last sutra Patanjali said that this is merely ONE path you could take to samadhi. Surrendering to Ishvara is simply another choice of a path you can choose to go down or not in your yogic journey. Yoga IS about questioning, experimenting, reflecting and then choosing your path. Your light is there, you are already divine, but whether you choose to surrender to this or take a different way, the destination on this journey called yoga will always be the same! Many paths, one destination which all lead to the amazingness that is you!

Sutra 1.24 Universal intelligence is the special self untouched by
misery, actions or the results of actions and accumulation.
Posted by rockyb at 9:32 PM